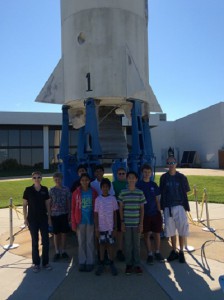 In April 2014, Wicomico Partnership for Families and Children (the Partnership) contacted community partners for assistance in creating a Zero Robotics team. The Zero Robotics program, launched in 2009, brings teams from across the country together to participate in a 5-week session to learn programming, problem solving, and engineering skills, and ultimately compete in a programming scenario, controlling SPHERES (Synchronized Position Hold Engage and Reorient Experimental Satellites) located on the International Space Station.

The Maryland Out of School Time Network sought teams from across Maryland to participate in this challenge, targeting incoming 6-9th graders with an interest in STEM (Science, Technology, Engineering, and Mathematics). Along with the Partnership, the Wicomico Public Library and the University of Maryland Extension Office formed a partnership to recruit, instruct, and coordinate efforts to host this new Zero Robotics team for Wicomico County.

On Friday, August 15, 2014, at the end of the summer session, the Empower Wicomico Zero Robotics team represented Maryland against 8 teams from across the nation in the Zero Robotics International Space Station Finals. In this year’s scenario, teams were asked to program their SPHERES to enact one or both of two possible strategies to prevent a comet from colliding with Earth. The code submitted by the Wicomico team was chosen as the best in the country, making Empower Wicomico the Zero Robotics Middle School National Champions!

The Zero Robotics program is led by the Massachusetts Institute of Technology, the Massachusetts Afterschool Partnership, TopCoder, and Aurora Flight Sciences under the sponsorship of NASA, the Defense Advanced Research Projects Agency, and the Center for the Advancement of Science in Space.