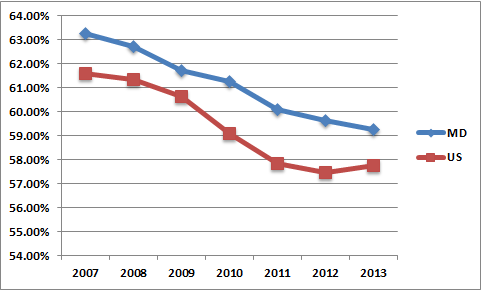 Definition:
The percentage of young adults ages 16 through 24 who are in the labor force

Despite remaining above the national average, the percentage of 16-24 year olds in the labor force in Maryland in 2013 showed a continued decline.  Maryland employment figures also show a clear connection between educational attainment and employment status, with a 9.7% unemployment rate for those with a high school education or equivalency as opposed to a rate of 3.5% for those with a bachelor’s degree or higher.  As a result, it is unsurprising that the two age brackets with the highest unemployment rates in Maryland are 16 to 19 and 20 to 24, with rates of 25.9% and 15.5%, respectively.

Over the last several years, Maryland has shown a continued commitment to preparing students to compete in a modern economy, particularly through Governor O’Malley’s goal of improving student achievement and school, college, and career readiness by 25% by the end of 2015.  From 2005-2006 to 2012-2013, the number of Maryland students receiving a college or graduate degree in a STEM field increased by more than 37%, and Maryland made investments in helping schools utilize emerging technologies in the classroom through the Digital Learning and Early College Innovation Fund. In addition, the University of Maryland System has made every effort to make higher education affordable for Maryland residents, and has seen the smallest increase in tuition rates for four-year public institutions of any state in the country over the last ten years.