Program Completion of Students with Disabilities 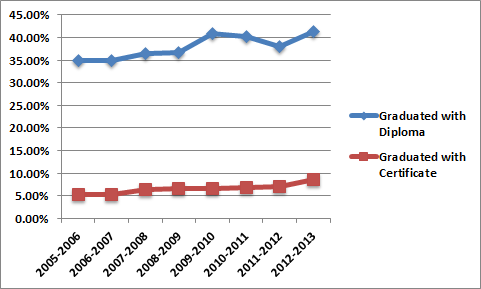 Definition:
The percentage of students with disabilities, ages 14 through 21, who graduate or complete school.

Several factors have directly contributed to the recent increase in the number of students with disabilities who received a high school diploma.  Maryland is continuing to build, implement, and sustain special education programs and related services with evidence-based practices that will yield results in dropout prevention, re-entry, and school completion for these students.  The Maryland State Department of Education (MSDE) is sensitive to the myriad social, emotional and physical challenges often faced by students with disabilities, which if not addressed, can have an adverse impact on the dropout, truancy and suspension rates among this population.

Maryland is one of 48 states that is currently engaged in a diverse number of targeted, evidence-based interventions to improve graduation/school completion rates for  all students, such as:  Positive Behavioral Intervention and Supports, Universal Design for Learning, mentoring programs, transition supports, and recovery and re-entry programs.

In an effort to enhance the quality of life for students with disabilities and their families, MSDE, Division of Special Education and Early Intervention Services (DSE/EIS), launched a five-year strategic plan through January 2018.  Focused on four strategic imperatives, the strategic plan is designed to advance the Division’s overarching vision of narrowing the achievement gap for all children with disabilities from birth through age 21.

In addition, Maryland’s students have benefited greatly from three federal grants that were awarded to MSDE by the U.S. Department of Education.  The Race to the Top (RTT) grant (2011); the Race to the Top, Early Learning Challenge Grant (RTTEC) grant (2012); and the State Personnel Development grant (2013) awards have allowed MSDE to create a number of new initiatives to facilitate school improvement and reform efforts at the State and local school system level (LSS).  Targeted activities include: