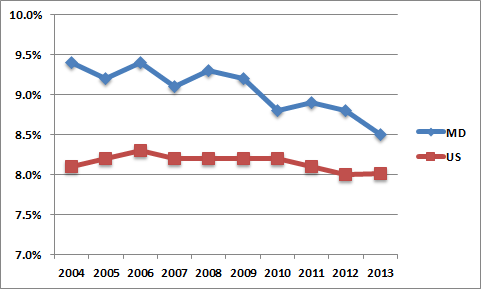 Definition:
The percent of all births and births in selected racial groups with birth weight less than 2,500 grams (approximately 5.5 pounds).

Some of the same racial disparities occur in LBW as in infant mortality, with Black infants nearly twice as likely to be born at LBW compared to White infants.*  Key maternal risk factors for LBW include chronic disease (such as hypertension), smoking, obesity, unintended pregnancy, late or no prenatal care, and maternal age.

LBW remains a key indicator both in Maryland and nationally.  In 2010, the U.S. Department of Health and Human Services launched Healthy People 2020, a ten year plan for improving America’s health, and included the goal of reducing low birth weights to 7.8% of all live births by 2020.  Maryland continues its work to ensure an ongoing decline in the percentage of LBW infants through a number of programs at the Department of Health and Mental Hygiene’s Maternal and Child Health Bureau.

*For Maryland data, racial groupings were determined by the race of the mother.