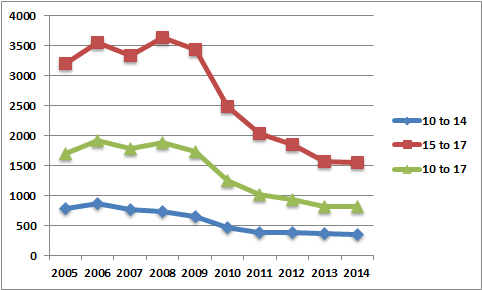 Definition:
The rate of referrals to the Department of Juvenile Services (DJS), per 100,000 youth ages 10-17, for felony offenses, including both violent and non-violent charges.*

Since FY2009, overall referrals have been declining nationwide, and Maryland mirrors that trend.  There are many theories that have been suggested to explain the decline – from removal of environmental lead, to changes in policing strategies, to policy changes, including the Maryland Violence Prevention Initiative.  At this point, DJS is continuing to evaluate the data to determine the best possible explanation.

*This selection is based on the Maryland Sentencing Commission which utilizes the definition of ”crime of violence” found in the Md. Code, Correctional Services Article, § 7-101(m) which defines violent crime as a crime of violence as defined in §14-101 of the Criminal Law Article, or burglary in the 1st, 2nd, or 3rd degree.  Md. Code, Criminal Law Art., §14-401 lists violent offenses as:  murder; manslaughter, except involuntary manslaughter; forcible rape; first degree sex offense; second degree sex offense with force or threat; robbery; use of a hand gun in the commission of a felony or other crime of violence; child abuse; carjacking; aggravated assault; and arson – first degree.  Non-violent felony offenses include breaking and entering, theft, motor vehicle theft, controlled dangerous substance (CDS) distribution and manufacturing, assault on police officer, third degree sex offense with or without force, arson – second degree, destructive devices and conspiracy to commit any felony offense.