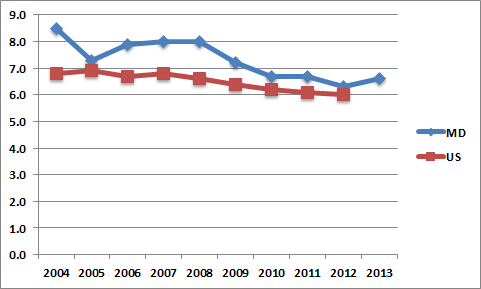 Definition:
The number of deaths occurring to infants under one year of age per 1,000 live births, for all infants, and for infants in selected racial groups.

The leading causes of infant death in 2013, as in recent years, were, in rank order:

Over the last several years, the O’Malley-Brown Administration has committed to reducing Maryland’s infant mortality rate, setting the goal of a 10% reduction by 2017.  For more information on this goal and the ways the State of Maryland is working to achieve it, visit data.maryland.gov/goals/infant-mortality.