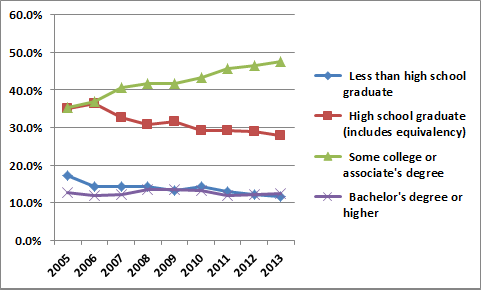 Maryland students continue to make progress across a number of indicators at the high school level, indicating a greater level of preparedness for higher education.  During SY12-13, for the eighth year in a row, Maryland students again led the nation in the percentage of the high school graduating class who had scored a 3 or higher on at least one AP Exam in high school.  In 2013, an all-time high of 85% of the 2013 high school class graduated in four years, and Maryland has demonstrated a continued commitment to preparing students for college and beyond through the rollout of the Partnership for the Assessment of Readiness for College and Careers (PARCC) assessments.

While more young adults are pursuing higher education, their fields of study are also changing to adapt to the modern economy. As a result, the number of students earning a college degree in a STEM field increased 36% in the last five years.