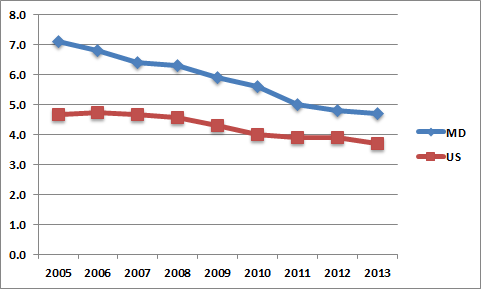 Definition:
The rate of violent crimes that are committed per 1,000 persons.*

Although the violent crime rate in Maryland has been decreasing steadily over the last several years, the rate is still higher than the national average by 1 per 1,000 persons.  The 2013 rate of 4.7 is for violent crimes per 1,000 persons in all of Maryland, with the highest rates localized in Baltimore City and Prince George’s County.  Several counties, though, including Carroll, Calvert, Montgomery, Howard, and Queen Anne’s, achieved a rate less than 2.0 per 1,000 persons.

According to the Maryland State Child Fatality Review Team’s 2014 Annual Legislative Report, 25% of children’s injury-related deaths (1 through 17 years old) were due to homicide between 2010 and 2012.  Of those 93 homicides, 53 were by firearms.

To address this issue of youth involvement in fatal and non-fatal shootings, StateStat requested that the Children’s Cabinet agencies examine the individuals involved in these incidents and identify trends.  After a thorough analysis of the youth involved, the Children’s Cabinet identified school suspension as a commonality and concluded that those students exhibiting risk factors such as suspension, expulsion, or absenteeism were at higher risk of being involved in a shooting incident and could benefit from care coordination using the Wraparound model of care.  In late 2013, the Children’s Cabinet opened a new population in the Statewide Care Management Entity (CME) called the “SAFETY Initiative” (Schools And Families Empowering Their Youth) to allow local school systems to make referrals.