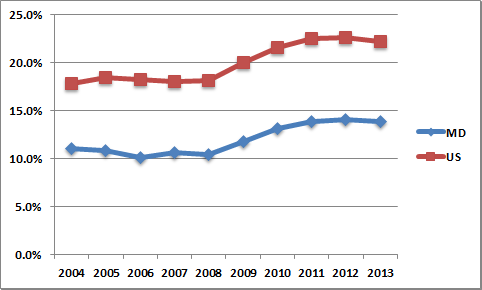 Definition:
Percent of children under 18 whose family income is equal to or below the federal poverty threshold.

Maryland’s child poverty rate decreased slightly in 2013, from 14.1% to 13.9%, and remains well below the national rate of 22.2%.  The two Maryland jurisdictions with the highest child poverty rates in 2013 were Somerset County and Baltimore City, with rates of 38.1% and 32.6% respectively.  Several Maryland jurisdictions had rates below 10%, including Anne Arundel, Calvert, Carroll, Frederick, Howard, and Montgomery Counties.

While Maryland’s child poverty rate is well below the national average, it is important to note that the federal poverty measure does not account for cost of living differences from one location to another.  Several of Maryland’s jurisdictions, 17 of 24, have a cost of living higher than the national average.  As a result, Maryland has sought to raise the eligibility threshold for certain benefits, including the Food Supplement Program, where many Maryland families at or below 185% of the federal poverty level are able to receive food assistance.  In addition, Maryland expanded Medicaid coverage for a number of populations up to 133% of the poverty level.