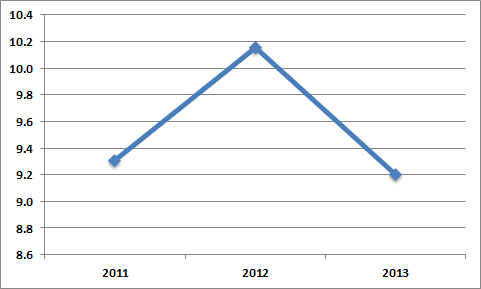 Definition:
Child Protective Services (CPS) investigations are ruled “indicated” where credible evidence is not satisfactorily refuted, or “unsubstantiated” where insufficient evidence is found to support a finding as either indicated or ruled out.*

This indicator measures the extent to which children experience reported abuse or neglect.  Child abuse and neglect can result in mild to severe physical injuries, and in some instances, death.  Victims of child abuse and neglect are also susceptible to possible attachment disorders, mental health issues, developmental delays, educational challenges, and behavioral problems.  Identifying families and children at risk for abuse or neglect, addressing these risk areas, and ensuring safety for children are essential to protecting children from harm.  According to the Child Welfare Outcomes Report, 2009-2011, the national child maltreatment rate was 9.9 in FFY11.  Maryland’s rate fluctuated by one point over the past two years (increased and then decreased by nearly the same amounts), such that the FY2013 rate of 9.2 is just below the FY2011 rate, and is lower than the national rate.

Maryland’s child welfare initiatives continue to focus on safely reducing the number of children in out-of-home care while strengthening families.  Maryland’s Family-Centered Practice model is a central component of DHR’s Place Matters initiative, and of the local Departments of Social Services’ work with families.  Workers develop individualized service plans based on comprehensive assessments of the families’ strengths and needs, with goals of increasing families’ capacities to protect their children.  Family Involvement Meetings are also used to engage families in service plan development, especially when safety/risk issues are severe enough that a child may be removed from the home.  These meetings, and other Family-Centered Practice approaches, strengthen families by bringing additional resources to families and helping children stay with their families of origin or relatives.

To further strengthen DHR’s work with families, and in accordance with new State law, DHR implemented Alternative Response (AR) in FY2014.  AR is a new approach for managing low-risk reports of child abuse and neglect that will result in safer children, stronger families and significantly fewer indicated and unsubstantiated findings.  Under AR, the definitions of abuse and neglect are unchanged and the total number of cases accepted for intervention by Child Protective Services is not expected to change.  Once a case is accepted, however, it will be assigned to one of two tracks:  Investigative Response (IR) or AR.  Higher-risk reports, including cases involving serious physical abuse or sexual abuse, will be referred to the IR track and will be handled the same way they have been in the past, resulting in a formal finding.

Low-risk reports will be assessed through AR.  Local staff will take into consideration key factors including:  the type of maltreatment, the level of risk of harm or endangerment to any child in the home, and the family’s history of involvement with the agency.  AR cases will not result in a finding of maltreatment.  Services to help reduce the family’s risk of maltreatment are provided in both IR and AR approaches.  AR has been implemented successfully in a number of other states, and is expected to lower the number of maltreatment findings (beginning in FY2014); as many as 50% of screened-in reports may be referred to AR, and thus result in no findings.

Footnotes:
*DHR has revised the methodology for this indicator to align with the federal measure for child maltreatment.  Calculation rate – the rate is calculated per 1,000 children under age 18 in Maryland.  Data on CPS findings is from MD CHESSIE (Maryland’s Stateside Automated Child Welfare Information System).  FY2011-2013 rates were calculated using CDC Bridged-Race Population Estimates.  The calculation (FY2011-2013) = (unduplicated number of children with at least one indicated or unsubstantiated maltreatment finding during the FY/population) * 1,000.