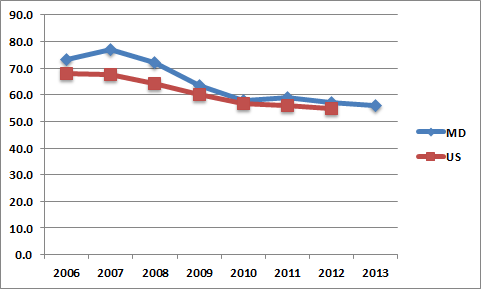 Definition:
The number of deaths to children ages 0-21 per 100,000 in the age-specific population.

Child deaths due to homicide, suicide, and unintentional injury are all deemed potentially preventable, and responsive to interventions designed to reduce these deaths.  Maryland’s child (age 0 to 21 years) death rates have been higher than national death rates for the last 7 years; however, the gap has narrowed.

Each Maryland jurisdiction has a Child Fatality Review Team which reviews unexpected deaths to resident children.  The purpose of these reviews is to identify changes in systems, policies, or practices at the local level which might reduce child deaths in the future. Examples of local team activities include training and community outreach addressing issues such as safe-infant-sleep practices, pool safety, CPR education, and gun safety.  Additional information about child deaths in Maryland, and the causes, is available in the 2014 Child Death Report.