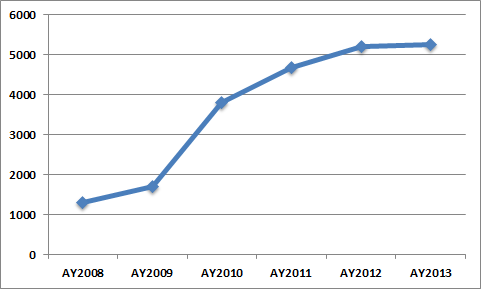 Definition:
Bullying is a form of aggression between a more powerful antagonist and his/her victim.  Bullying can be physical, verbal, and/or psychological, and can be direct or indirect.  Chronic victims may experience mental health problems such as anxiety, academic difficulties, poor concentration, and withdrawal.  Bullying occurs across all age groups and includes sexual harassment, dating violence, gang attacks, domestic abuse, child abuse, and elder abuse.

A total of 5,255 incidents of bullying, harassment, or intimidation were reported during SY12-13, and increase of 42 reported incidents over the previous year. Fourteen Local Education Agencies (LEAs) indicated an increase in the number of reported incidents, while eight LEAs indicated a decrease and one  LEA and the SEED School remained the same.  Several LEAs reported significant increases in the number of incidents, notably Caroline, Frederick, and Somerset Counties.

Baltimore County reported the most incidents with a total of 603 and a rate of 5.6 incidents per 1,000 enrolled students. Following Baltimore County was Baltimore City (532, 6.3), Montgomery County (524, 3.5), Howard County (435, 8.4) and Prince George’s County (371, 3.0) respectively. Kent and Talbot Counties reported the most incidents relative to enrollment. It should be noted that the two school systems (Kent and Talbot) with the highest number of reported incidents relative to enrollment are systems with relatively small student enrollments.

Based on the methods of reporting and the varied means of distributing the bullying and harassment reporting form to LEAs, it is speculated that the increase in reported incidents may be attributed to an increase in awareness of bullying and harassment on the part of students, staff, and parents.  Since the change in the law in 2008, staff members were able to use the same reporting form as students and parents, thereby providing additional information. The 2012-2013 school year marks the fourth year during which bullying prevention programming was required to be presented by the LEAs to students, staff, and volunteers. Bullying prevention models and frameworks such as PBIS, Olweus, Character Counts, Restorative Practices, and Text-2-Stop It are used throughout the LEAs. The programming further heightened awareness of the issue among the school communities, which helped keep the number of reported incidents relatively stable when compared to last year.

More information about Maryland’s efforts to prevent bullying and harassment are available from MSDE’s Student Services and Alternative Programs Branch, and additional data and supporting information is available in the 2014 “Bullying, Harassment, or Intimidation in Maryland Public Schools” report to the Maryland General Assembly.